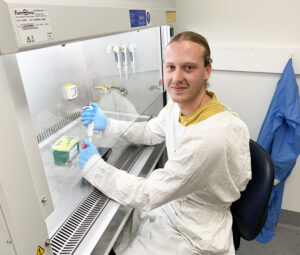 Sam Heddes is 24 and a third year PhD student at the Institute for Glycomics working under the supervision of Professor Mark von Itzstein AO and Dr Andrea Maggioni.

Sam graduated High school on the Gold Coast in 2014 with awards in Biology, Physics and Physical Education. He then went onto Griffith university where his undergraduate degree was Advanced Biomedical Science with Honours. He graduated with First Class Honours and a GPA of 6.25. His Honours were undertaken at the Institute for Glycomics under the supervision of Prof. Mark von Itzstein and Dr. Andrea Maggioni. He stayed at the institute under the same supervisors and carried on the work from his Honours project into his PhD project.

Essentially, Sam is a cancer biologist ( and/or cancer Glycomics) and has experience in a wide array of techniques including Protein production, Crystallography, HPLC, NMR, SPR, cell and tissue culture as well as a number of other areas. His PhD project is a structural and functional investigation of specific proteins in an attempt to validate them as viable anti-cancer drug targets. The second phase of this research is designing inhibitors for the specific enzyme and testing them at a cellular level. Sam’s specific cancer of interest is melanoma, however the development of a universal drug for a number of different cancers is the end goal.

When he is not in the Lab he is spending time with his Family as well as fishing, surfing and camping. Sam is very excited to participate in the 2021/22 IMNIS mentoring Program