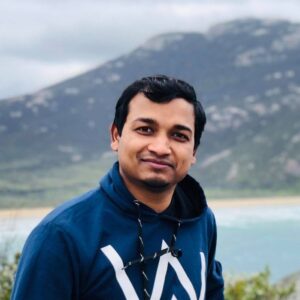 Rocky Chowdhury is a PhD candidate in cancer biology at School of medicine, Deakin University. He completed his under-graduation as well as Master of Science (M.Sc.) in microbiology in 2013 and 2014, respectively, from University of Chittagong, Bangladesh, where he studied about bacteria, fungi, virus, algae, basic immunology, genetic engineering, fermentation technology, bioremediation, and biopharmaceutic. In his post-graduation, he completed a project on bacterial biodegradation of polycyclic aromatic hydrocarbons.

After graduation, he got an opportunity to work as an associate researcher in the Department of Microbiology, University of Chittagong, Bangladesh form August 2015 to January 2019. As an associate researcher, his role was to design research, execute experiments, analyze data, prepare article manuscript and assist Master of Science thesis students. Besides, he had been working as a Microbiologist in a fishery-based company named “Taj Munir Fish Preserver Ltd.”, back in Bangladesh, from January 2015 to January 2019.

In 2019, he has been awarded DUPRS scholarship and he started his PhD in cancer biology. His project aim is to develop a chemical-antibody (aptamer) to capture exosomes, which carry cancer-related markers from their origin of cells, from blood samples so that his team can develop a liquid biopsy technique to diagnose early-stage cancer as these markers can be found in an early stage of cancer, even before developing significantly visible cancer tissues. Moreover, conventional tissue biopsy is problematic as it cannot be performed repeatedly to monitor the progress of the disease. Thus, liquid biopsy will be able to detect early-stage cancer and can be used repeatedly to monitor the progress of the cancer. Such research will be helpful for the development of precise theranostics. After completion of PhD, his career objective to join biotechnology/biopharmaceuticals industry as a researcher/scientist in Research & Development.