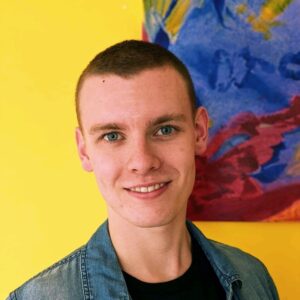 Oliver graduated high school in 2014 at Newtown High School of the Performing Arts (NHSPA) and has worked casually/parttime in various hospitality and retail positions since he was 14. He completed a Bachelor of Biomedical Science (Honours) at the University of Technology Sydney (UTS) in 2018 and transitioned into his PhD candidature in 2019 under supervision of Dr Cindy Gunawan as part of the Biofunctional Nanomaterials group. His PhD project seeks to induce and subsequently characterise the mechanism(s) of resistance to silver nanoparticles (NAg) in a model strain of the critical priority bacterial pathogen Acinetobacter baumannii.

NAg is a highly effective alternative broad-spectrum antimicrobial agent frequently used in the medical field and consumer market as a coating agent to prevent microbial contamination/colonisation. Despite its strong toxicity, there has been growing evidence over the last decade highlighting that prolonged NAg-exposure to bacteria can lead to the selection of silver resistance. To date, no studies have assessed the ability of A. baumannii to develop resistance to NAg, despite known evidence of resistance generation to other heavy metals in this species. For the first time, Oliver’s work has found that A. baumannii can develop stable NAg resistance, but the mechanism(s) behind this resistance are still yet to be elucidated.

Outside of his PhD project, Oliver regularly mentors and supports honours students with their laboratory work and data analysis, and frequently assists other researchers with conducting experiments whether it is for an article co-authorship or simply providing a favour.

Beyond his scientific studies, Oliver is an avid rock-climber, motorcycle rider, and bush walker, and enjoys regular weekend getaways with friends and family.