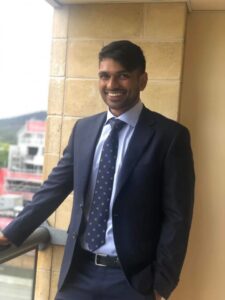 Luban is a 24 year old PhD student working at the School of Medicine in Deakin University. He is originally from the Maldives, but he came to Australia to pursue his higher education, and has been studying full-time since 2016. He completed a Bachelor of Biomedical Science at the University of Canberra, and then proceeded to complete his Honours year at Deakin University.He made the move to Deakin University as there was a project he was deeply interested it, and he felt it was more catered to his interests unlike projects available in Canberra.

After finishing his Honours year, he was fortunate enough to receive a Deakin University post graduate research scholarship for my PhD. He started his PhD project under the same supervisor working on a similar topic but with additional aims. His project aims to understand the kinetics of cytokine signalling, specifically the JAK/STAT pathway utilizing the zebrafish as a model. He is mostly interested in exploring the roles of JAK/STAT signalling in haematopoiesis and immunology. A major part of his project is creating various knockout zebrafish lines and disease models using the CRISPR/cas9 system.

Furthermore, he is proficient in a number of molecular biology techniques such as DNA, RNA and bacterial methods. In addition, we utilise a number of techniques using transgenic zebrafish such as fluorescence microscopy and flow cytometry. Due to the restrictions with COVID-19, his project has faced some restrains but for the most part he remains on track to finish on time.

Luban believes this program is a good fit for him, as he hopes to better understand the opportunities available for him in industry. He is also keen on identifying how he can use his skill set for any job opportunities outside of academia.