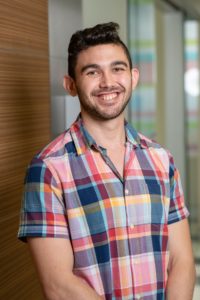 Elliot Teo, mentee in the 2019 MedTech-Pharma program in QLD (The University of Queensland)

I commenced my Bachelor of Biomedical Science at The University of Queensland in 2013 and tailored my coursework for specialisation in anatomy, physiology, and neuroscience. During this time I also participated in two research projects; the first characterising a novel C.elegans egg-laying mutant, and the second, characterising the morphology of the neuromuscular junction in a mutant mouse strain. At the beginning of 2016 I began a nine month Honours project investigating the respiratory, cardiovascular and cerebral effects of vagus nerve stimulation in both the rat and cat models. Although my official project concluded in 2016, I continued these lines of investigation on a volunteer basis until mid-2017.

In October 2017 I commenced a PhD project which aims at characterising a novel stem cell preparation for the treatment of neonatal hypoxic-ischaemic encephalopathy in the piglet model. My investigations involve a detailed neuropathological assessment using both microscopy and magnetic resonance techniques to assess neuroprotective efficacy; proteomic screening and pathway analysis to understand the mechanisms by which the stem cells exert their effect; and, deconstruction of the electrical activity of the brain and heart to evaluate their potential as prognostic markers to inform future clinical trials. My project will officially conclude in October 2020 and am focussed on equipping myself with transferable skills should I wish to leave formal academia.

You can find Elliot on: