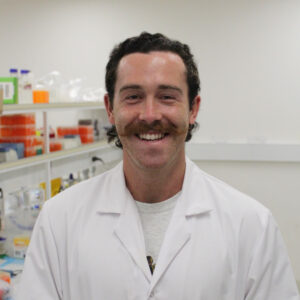 David is a PhD student at the Monash Institute of Pharmaceutical Sciences, working under the supervision of Assoc/Prof Erica Sloan in the Cancer Neural-Immunology Lab. His project investigates the effect of radiotherapy on nerves in breast cancer. The first study of his project aims to determine whether radiotherapy increases the growth of nerves from the sympathetic nervous system (SNS) in breast cancer, using both mouse models and samples from patients with breast cancer. The next study will be to investigate whether blocking SNS signalling increases the efficacy of radiotherapy, with or without immunotherapy, by enhancing regression of irradiated tumours, and by inducing an anti-tumour immune response at non-irradiated tumours (the abscopal effect).

Previously, David completed his Bachelor of Science at the Clayton campus of Monash University in 2017, majoring in physiology and pharmacology. He undertook Honours in 2018 at the Baker Heart and Diabetes Institute where he remained for another year as a research assistant.

Beyond his PhD, David is the Chair of the ASCEPT Student Committee. He is a teaching associate for a first year Bachelor of Pharmacy unit and he works as a scientist mentor for the Gene Technology Access Centre, mentoring high school students in life sciences.

You can find David on