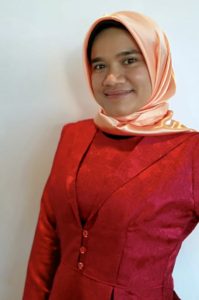 Before graduating with a B.Sc in Chemistry from the University of Syiah Kuala, Aceh-Indonesia, Cut Aja Fauziah got involved in assisting in the humanitarian tsunami emergency and subsequent recovery efforts. She has been involved in several community-based projects, which builds capacity and assists community members regarding psychosocial and gender-based violence issues. This story was started when Aceh – Indonesia (her hometown) was hit by a tremendous earthquake and tsunami in 2004. Those disasters, and the political conflicts that preceded it have touched her deeply and inspired her to help the community.

In the surface, it might appear odd that her formal undergraduate education in chemistry would eventually lead a career as the humanitarian worker. However, it does not sound surprising that she has chosen a different career path, which has brought where she is right now. She understood that Aceh certainly demands to rebuild its human capacity and to cover the loss since hundreds of thousands of people had lost their lives or gone missing due to the tsunami. This motivated her to pursue a master’s degree in metallurgical engineering at the Western Australian School of Mines (WASM), Curtin University, Australia, under the scholarship of the Indonesian government.

Right after graduated, she was employed at her alma mater, the University of Syiah Kuala, as a lecturer. She fully realises that the future goal will require her to pursue higher education. Currently, she is enrolled as a PhD student in petroleum engineering at Curtin University with a scholarship from the ministry of finance of the Republic of Indonesia. Her research focus is on the CO2/brine/mineral (clay, sandstone) system wettability, with the implication of the research is related to the flow of CO2 and its entrapment in the subsurface formations for carbon dioxide geo-storage and fluid spreading and dynamics in the reservoir for carbon dioxide injection of methane recovery.