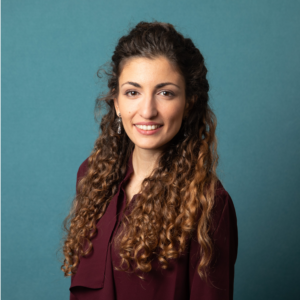 Arianna Oddo, mentee in the 2020-21 program in VIC (Monash University).

Arianna Oddo is a PhD candidate at Monash University, working under the supervision on Prof Nico Voelcker at Monash Institute of Pharmaceutical Sciences. Her project aims to develop alternative approaches to animal testing in the context of pre-clinical and toxicological studies. Her research focuses on organ-on-a-chip technology as an emerging screening platform to study the interactions between human organs and nanoparticles. More recently, she has started working on a brain-on-a-chip device, which is being used to study how certain viruses can travel from blood vessels to the human brain causing devastating diseases. She has a good track record as a science communicator, having been invited to a series of events such as Pint of Science Australia and Stories from the Science Lab, an initiative by the City of Melbourne with Dr Amanda Caples, Victoria Lead Scientist. She was also a featured speaker on the Einstein a Go-Go show (TripleR, 102.7FM, for the second round of 20 PhDs in 20 min). In 2018, she was selected as one of the members of the Australian Delegation invited in Germany for InnoHealth Australia, an initiative supported by the German Federal Ministry of Education and Research and the Fraunhofer Society.

Before joining Monash University, Arianna obtained a BSc in Chemistry from the University of Milan, Italy, and a MSc in Chemistry from the Ludwig-Maximilians-Universität in Munich, Germany, with the support of a DAAD scholarship (German Exchange Academic Service). Upon graduation, she completed a traineeship at the European Commission’s Joint Research Centre, undertaking research into nanomaterials behaviour in support of EU legislation. In 2017, she was one of the 100 young individuals selected for the Berlin G20. She has a keen interest in science and its role in public policy. She is fluent in Italian, German, and English.

You can find Arianna on: