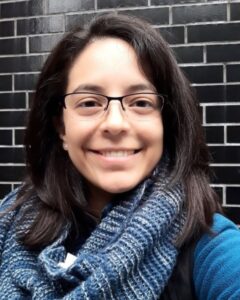 She received a bachelor’s degree in pharmacy (2013) in the Universidad Central del Ecuador and her graduation thesis involved the implementation of good manufacturing practices in a small pharmaceutical company. After graduating from her bachelors and throughout her master’s she was hired by the company she did her thesis in and continued her journey in the quality assurance department implementing good manufacturing practices for sterile and common areas, focusing on injectable products and repackaging. The company finally obtained their certification on 2019 after the team worked, she built since 2012.

While doing that she obtained a scholarship for academic merit and obtained a master’s in microbiology (2016) in Universidad San Francisco de Quito both degrees obtained in Quito-Ecuador. She also worked as a student demonstrator in clinical pathogenic and microbiology food labs while working on her thesis in leptospirosis.

After completing her master’s, she was awarded the Griffith University Postgraduate Research Scholarship (GUPRS) and Griffith University International Postgraduate Research Scholarship (GUIPRS) to pursue her PhD studies in Gold Coast, Australia. After studying current therapies for human illnesses and their causative agents, she got curious about the interaction that microorganisms have with humans and the consequences that their relationship develop in their future and past evolution and survival as a species. Currently, her research consists in proving that oncogene editing of HPV E7 in combination with STING agonist treatment would result in the effective oropharyngeal squamous cell carcinoma tumour clearance.

She has authored two thesis, three posters, four publications in international journals and presented her work in an international conference held in Quito. Her work has been cited y different articles and her h-index is 3 in SCOPUS and RG score of 11.08.

She is currently working in developing new therapies for cancer with CRISPR and also looking for the next opportunity to find better alternatives to cure HPV derived cancers.